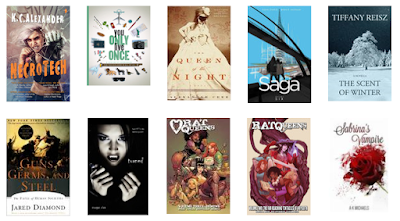 
This month got me back on the reading train (sort of) and hopefully will be a portent of things to come in 2017.


*The average rating was dragged all the way down by those three DNFs. It’s 4.14 without them. 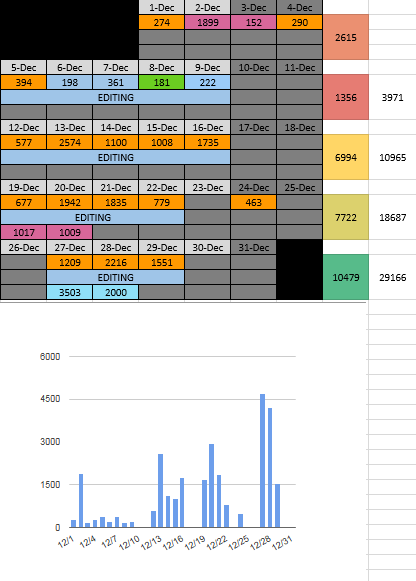 I’d say I’m proud of my focus this month, but if you do the full count, 2/3rds of that count is from admin which is kind of the epitome of a lack of focus. Blog posts like this one, outlines and pitches, some of my business mail, any random bit of writing notes jotted down on my phone while grocery shopping… It’s all stuff I need to get done, but when I see that much orange on a spreadsheet with so little in the way of other writing, I do the scrunchy-face scowl at it.


I suppose I can feel proud of the editing I’ve gotten done. If you follow me on Instagram, you’ve no doubt seen the posts here and there of the book I’m slowly gutting. At the moment I think I’m averaging 20 minutes a page… so it’s definitely a long haul.

This is the last of my accounting posts for the year, next up, I’ll have a breakdown of what 2016 looked like as a whole with those fun counts and graphs and what not. You’ll have to forgive me for posting only numbers in that one, as a look back at everything else would have me lighting matches and thinking thoughts of the apocalypse.


So yeah, check back Monday to see what I did, how I failed myself, and all that fun jazz. But for now…


Meet me in the desert after midnight, bring extra gasoline, and let’s burn this year down to ashes.

I didn’t reach my goal of 57k. Not by a long shot. But I’m not stressing about that. It’s better than four months from last year, and as long as I’ve got an average of 1k/day (of the month, not actual writing days), I’m willing to count that as a win.

It’s been a rough start to the year, which invariably impinges on the writing stuff. So mostly I’ve been doing world building and nonsense like that. Things that add eventual depth to the story, but will probably never make it onto the finished page.

Pages Edited: 164
I’ve been sneaking these in wherever and whenever I can. But the bigger changes are oddly the easier to deal with, so these finite changes are taking FOR EVER to deal with. Next month should see a higher number *fingers crossed*.

I only got to 3 of the 5 books in my proposed stack. But I’m on track for the GR challenge, so I’m definitely not complaining. I started on Red Queen, but hav…
Read more

- January 04, 2019
If you were here on Wednesday for my IWSG post you’ll have seen that I don’t do resolutions.
They don’t work for me, I can’t set a hard and fast plan at the beginning of the year and stick to it. That’s just not how my brain is wired. And I’m 100% okay with it.
But I do like goals. I just like them on a smaller scale.
Things that can be tweaked and adjusted without any real “shame”.
Therefore, I am here to tell you my soft goals for the quarter, and my hard goals for the month.
In the first three months of this year, I’d like to get the following out of the way:

Writing: 220,000-words
Reading: 15 books
Editing: 3 books, plus some extra bits
Blogging: Back on a regular routine

Not going to lie. That 220k scares me a little, even though I wrote almost 100k more than that in the first quarter of 2013. My first quarter average for the last 6 years has only been about 171k.
I was recently accused of having too many books. A notion at which I scoffed and then ignored. But I do have too many boo…
Read more