Showing posts from January, 2017
Show all

I’ve mentioned before, here and elsewhere, that I don’t make resolutions. I make goals and I set them all throughout the year and shift as necessary, etc. But some goals simply HAVE to be set in January. There’s no getting around it. With the exception of school things, January is place where our year starts and so, if you want to track something over a year, it just makes sense to do it now. One of my main goals each year is a writing goal for word count. In 2013 it was a million words--something I’m quite chuffed about completing as you’ll know from the fact I absolutely NEVER talk about it. In 2014 it was to average 1,000-words per day (which I did) because after writing those million words, I had a ton of editing to do. In 2015…. Well, health issues took me on a fun downhill slide that didn’t end until I got on the right medication in October. (I got 1/3rd of my total in those last 2 months). It wasn’t a wasted year, but man does it look sad next to 2014 and 2016.
Post a Comment
Read more 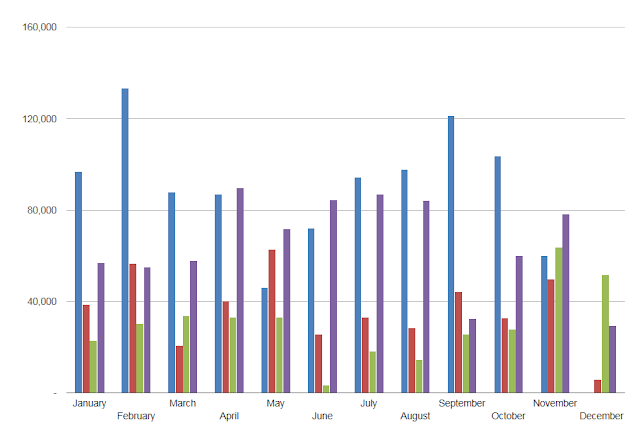 Writing Goal: Better than last year. Reality: Over 400k more words Blue to Purple, 2013-2016  monthly writing totals   If you’ve been following along with the monthly goal reports, you’ll have seen that I spent the year kicking 2014 & 15’s respective butts. There are only 3 months that I didn’t surpass them both, and of those three, I still got the silver medal. 2013-2016 year totals   By June, I’d surpassed 2015’s count, and in July, I beat 2014. I even surpassed 2013’s counts for 5 individual months.   I did not, however, manage to get myself more focused. Hopefully I can get on that for 2017.     Publishing Goal: 8. Reality: 5.   This year was one of getting to understand myself in a better light. One of the self-discoveries I came to was that my pace on things is not a constant. Some edits are the easiest thing in the world. Some are like pulling out my own fingernails, still others find me staring at a page and wondering if Englis
Post a Comment
Read more
More posts