So I wrote an initial version of this post back in December and it was a total mess. There was just way too much going on because I was trying to write it for the whole year, and my goals… they are lofty. That is why, this post is just about the first quarter. Baby steps, yeah?

My goals here are all writing based. I haven’t figured out what I want to do about reading, but when I do, I’ll post that up here somewhere too. Maybe it’ll go in with the end of January post, who knows.

Let’s talk about where I want to be…. 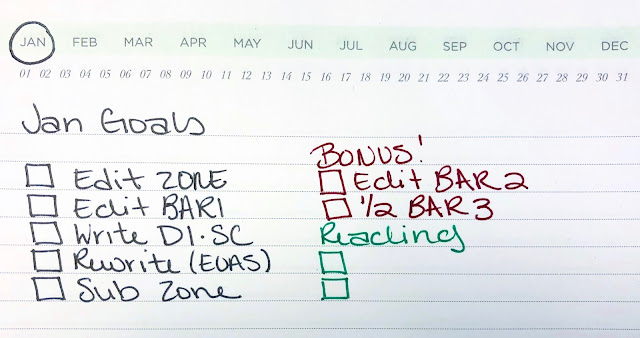 Finish 2 drafts
I have a short story I’m working on that I want to get the rough draft finished this month. It’s my weekend project and its low word count should help keep me focused.
Along with that, I’ve got to finish up the final redraft of Enemies of a Sort (more on that later in the month.
Bonus: Tackling a draft I was hoping to get done in December that got cut from the priorities.

Finish 2 Edits
Have I mentioned the stack of drafts that’s been piled on my filing cabinet waiting for the red pen of death? Well I’m on the final edit of one of those (thank God) and if all goes according to plan, I’ll have it done the 19th.
Along with working on my serious backlog of edits, I finished up another project in November that is on the slate for its first go-through. It’s short, so I’m pushing it through ahead of some of the longer ones that have been languishing.


Submit TBZ
There’s a book I’ve been working on that I absolutely love and I want to share it with the world, but it’s not something I think I can give its due through self publishing, so I’m going to trot it out to agents who have been absolutely wonderful to me in the past and see if any of them love it as much as I do.

Finish 3 Drafts
The next Clockwork fairytale isn’t going to write itself, even though I’ve done so much plotting on it I spent a few hours looking for the draft I hadn’t actually written yet. (That was fun.)
I’ve got another shorty I want to finish. I got her to around the 13% mark in December before I realized the time crunch I was on and put her toward the back of my priorities list. This is going to be her month.
Along with the rereleases of the Flynn Series, there will be bonus stories in books 2-8. (Details to come)
Bonus: There’s a book I’ve been dabbling with for way too long and I just need to get her written and done. She’s going to be a labor of love, so what better month than February to try to move her into the “to revise” column.

Finish 2 Revisions
The end of last year got away from me on this, so I’ll be doing my final revisions of Flynn this month to get him ready for his March rerelease date.
It’s my hope to get Tyler sorted out as well. But I’ll be honest. He is the priority that will be shifted to March if time necessitates it.

Finish 1 Edit
I’ve got a short little thing from December that I’ll be pushing through a first edit. We’ll see how much of a mess that one is.

Begin Reissue Flynn Monroe Series
Enemies should be out by the end of the month. (A definite release date and more details to come)

Finish 3 Drafts
The final shortie of a project that Is secret because it might not go anywhere is on the docket. Then it’s just 2 more of the bonus stories for the Flynn rereleases.
Bonus: Debt Collector (Oath Breaker’s Sequel) should be almost done by the end of the month. It’s not technically in this month’s goals, because my scheduled completion date is April 13th.


Finish 1-2 Revisions
If Tyler winds up in this month’s to do’s it’ll be two, if not, Finalizing Ray will be the main focus for my clean-up efforts.


Finish 2 Edits
Patching up that short story I finished in January.
One of the novellas from February (not sure which at this point)


Republish Flynn
I’m starting to feel like a broken record, but there will be more info on this (and a set date) as the months progress.

And that is that.
I adore goals. Love them so much. But that can sometimes set me up for trying to jump across to great a chasm. That’s why I’m not pushing myself out too far this year.

Alright, let’s see how this goes. Check back at the end of the month to see how well I did… or if I belly flopped.