Niobe: She Is Life - A Review 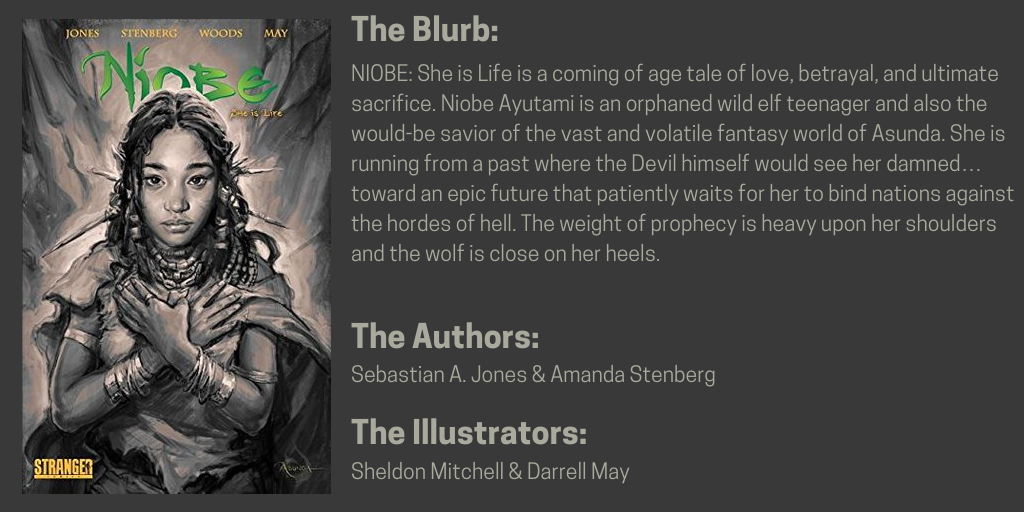 If you walked through the exhibitor hall at Phoenix Comic Fest this year, you really can’t have missed the Stranger Comics booth. There was an enormous banner with the cover of Niobe: She Is Death and the Untamed: Killing Floor. Both of these beautiful illustrations feature the a striking brown elf girl (one as a child, the other as a warrior) and an amazing young woman spent delivered a pitch she better have been paid well for because it was delightful, engaging, and concise.

Niobe: She Is Life is the first of the Stranger Comics line that I’ve read. It was the reason I went to the booth, after all. So I sat down and read through the epic fantasy on a bright Saturday, and was left… confused.

The art and illustration in this volume are delightful. Color and detail are not spared in the creation of a world that, while small within the story, feels as though there are realms left to discover and explore. The characters are uniquely depicted, and their surroundings are evocative of the genre’s whimsy and danger.

But I had to check--twice--to make sure I was reading the first volume. After doing a little research it looks like I might have wanted to start with The Untamed? That was not related to me while purchasing, so I don’t know if that was the actual intent.

The story starts off in a place that I didn’t question, and it quickly flows into the sort narrative you would expect from a coming of age story… but that quickly transitions into a headlong race to the volume’s final conflict that left little room for world building or character growth.

Again, maybe I was supposed to star with The Untamed, but that wasn’t clear, so I have to approach this review as though the book was meant to be the beginning of its own series, removed from that one. And in that sense… it wasn’t quite what I’d hoped for.

The bones of the story themselves are strong. It’s a story I want to read (and one I will continue to recommend with my caveats) but it’s also a story I want muscle and flesh from.

I finished reading the volume with no clear idea of Niobe’s age (Pre-teen? Teen? Small 20-year old?). I set the story aside unsure how she had wound up having such strong feelings for a character she barely spent any time with. I still don’t know enough about why she was being hunted, why she was tentatively accepted by (dwarf) and also feared/loved (lusted for?) by (goblin).

Maybe those questions will be answered when I read the next volume, or other stories within the Stranger Comics line. I’m not sure. Hopeful, but not sure.

Final verdict for this one:
Read it. It’s beautiful and the bones are strong… but maybe start with the Untamed? I’m not sure. I’ll check back on that one.

Check it out at Stranger Comics