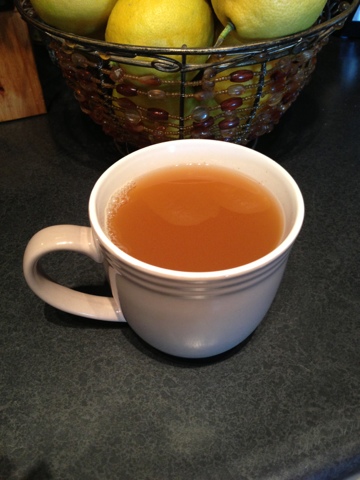 We’re in that fun season where sniffles and sneezes, and rib cracking coughs are starting to make the rounds. That means it’s time to share another, updated version of the spice tea recipe that keeps me alive when the yearly plague rolls through.
As always, it’s pretty much the same as previous versions I’ve posted. Though, this time I have added a pair of variations that I’ve enjoyed recently.
If you make it often enough, like I do, you’ll eventually get to a point when you don’t need to measure out the water (it hits right beneath the handles on my stock pot). And you may want to adjust the spice ratio too. I pull my cloves and cinnamon out with a tablespoon, but I let them heap too, so I don’t know exacting amounts.
When you’re feeling like it’s not quite enough, adding whiskey* is a good plan too.
Ingredients
Place cloves and cinnamon in an unfilled Tea Bag or Cheesecloth. I buy my tea bags at the local Asian market, they’re usually under $2 for a 60pk. They work great for single cups of loose leaf tea, too.

Add water, sugar, and spice tea bag to stock pot bring to a rolling boil, allow to boil 5 minutes. This part usually takes a while, it’s a gallon and a half of water after all.

Remove from heat, add black tea. Stir and let steep for 5 minutes. Before the tea goes in, the water should already be quite dark from the spices.

Remove all tea bags, stir in juices. And then you’re ready to fend off the crud.

***
Some Variations!
*Obviously, this does not apply if you're putting it in a to-go cup.
Recipes Remedies Seasonal Sick Tea