Why Doctor Strange Is My Least Favorite MCU Film To Date 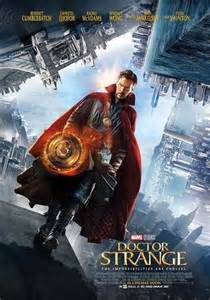 Note: I do not count the Hulk films even if they do, technically fit within continuity.
Something I've noticed in the time since this film was released: I feel pretty alone in this sentiment among the people I’ve talked to about this.

Let’s start with me telling you what I liked about it:

The film is beautiful in color scheme and in it’s fun Escher-y matter manipulation. Watching it in 3D is a fun trip.

But that’s literally it.

I hate Steven Strange.
There was no point in the time before his car accident that I wanted to see a redemption arc. When his car went off the road a teensy tiny part of me, really hoped that it was a Drew-Barrymore-In-Scream situation, and some other strange would appear to misguidedly avenge him or something. The guy is a grade-A prick from the beginning and I don’t really care if people like him get to be better people.

If there was a redemption moment for his character… I didn’t see it.

You take an amazing surgeon who’s obsessed with fame, his perfect record, and stroking his ego with every appendage possible… and he winds up being some ‘better than everyone else sorcerer’ who’s still looking for ego stroking anywhere he can find it.

He studies so hard! By breaking the rules and having a photographic memory. The guy has no humility and he never gains it either. If the Ancient One’s death is his “slap on the wrist” then it wasn’t enough and someone should have taken a ball peen hammer to the back of his head.

Sure, he loses the use of his hands and can never do the thing he was amazing at again. But being a world class surgeon wasn’t what made him a prick. It was thinking he was untouchable… and hey look at that. He’s now a world class sorcerer, and still thinks he’s untouchable.

Dormamu isn’t scary.
What the heck was that, even? Someone took the MCP from Tron, have it a undulating cuttlefish fin texture and some googly eyes and… what? We’re supposed to be scared? I laughed in the theater because it was so ridiculous. He turns Steven into that voodoo doll knife block and kills him over and over again, and maybe it’s the fact that I wanted him gone ten minutes in that made that no problem at all for me, but there’s nothing scary in that death. Guys. Fantastic Four: Rise of the Silver Surfer did this thing better, and we all know that was a terrible movie.

I was bored.
Sitting in the theater for this one was an exercise in patience. I looked at my watch around the 20 minute mark and literally could not believe how little time had passed. The pacing was wrong. I get that origin stories require some special things for the set-up, but they did this one wrong.


Not even the cape could save this one from being at the bottom of my ranking.

And that is why, Doctor Strange just narrowly won the ‘which is the worst’ competition against Thor.
Marvel Movie Review Movies Super Heroes