Showing posts from January, 2019
Show all

I keep pretty detailed spreadsheets for each month because I’m a little neurotic, and I like seeing the progress in an analytical way. I totally get that this doesn’t work for everyone, that it can be frustrating and counterproductive for some. I started back in 2013 when I decided I was going to write 1 million words in a year (or 11 months, as it turned out) and just kept doing it. It holds me accountable, keeps me on track, and helps me remember that I’ve done this before. I can do it again. Words Written: 600,113-words in 12 months (AVG 50,009-words/month) By the middle of December, any other goals had whittled away until the only thing that really remained was getting to 600k. And by “really mattered” what I mean was, it was the only remaining attainable year-goal, and I’ve been focusing on the attainable lately, rather than trying to push myself to do something that is… a nightmare on paper. My best month was October (113,815) my worst was March (19,684). These ar
Post a Comment
Read more

- January 04, 2019
If you were here on Wednesday for my IWSG post you’ll have seen that I don’t do resolutions. They don’t work for me, I can’t set a hard and fast plan at the beginning of the year and stick to it. That’s just not how my brain is wired. And I’m 100% okay with it. But I do like goals. I just like them on a smaller scale. Things that can be tweaked and adjusted without any real “shame”. Therefore, I am here to tell you my soft goals for the quarter, and my hard goals for the month. In the first three months of this year, I’d like to get the following out of the way: Writing: 220,000-words Reading: 15 books Editing: 3 books, plus some extra bits Blogging: Back on a regular routine Not going to lie. That 220k scares me a little, even though I wrote almost 100k more than that in the first quarter of 2013. My first quarter average for the last 6 years has only been about 171k. I was recently accused of having too many books. A notion at which I scoffed and then ignored. But I do have
Post a Comment
Read more

It’s a New Year and I'm sure you’ve heard it a hundred times. “New Year, New Me!” Pretty sure this is going to be another “New Year, Same Me” situation. And I’m okay with that. Do I hope to get more done this year than last? Yes. I always hope to improve, but I also am just happy to do as well as I did last go around. Because sometimes, that’s all you can really ask of yourself. Sometimes you can’t even ask that, and I’m willing to admit that I’ve had those years recently. And that’s okay. I don’t make resolutions. They aren’t beneficial to me, personally, and I don’t have time to do things that fall into that category. For those of you who do find them beneficial, that’s awesome. Kudos. I wish I could say the same. Truly, I do. I try to make bite-size goals on a monthly basis. Usually no more than three “big” things. What about you? Do resolutions work for you? Do they fizzle out by March? How do you feel about goals in general? Join the insecure posting.
1 comment
Read more 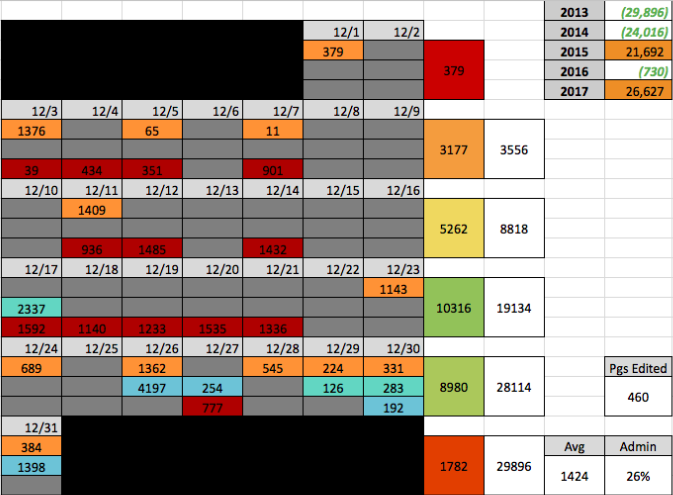 Words Written: 29,896 -words in 21 days (AVG 1,424-words/day) 3 projects + Admin (26%) December is the one month of the year where I expect nothing of myself. Which is honestly pretty hard. Being productive and busy were pretty much the requirement while growing up. Down-time wasn’t approved of. So it’s really hard to disconnect. And when I say I don’t expect anything from myself, that doesn’t mean I don’t have a specific set of goals (nor does it mean that I’ll manage to not beat myself up over not doing a ridiculous amount of work), it just means that I try VERY hard to let things go when I reach the point at which they are no longer achievable, and not beat myself up over that. By the time Christmas rolled around (with all of its distractions) my December goal had turned into “Let’s hit one final year-related benchmark” which was less than 10K away. So, I was pretty sure I’d manage to hit it. And I did. At the bar, at about 11:30, on my phone. I probably could have ma
Post a Comment
Read more
More posts