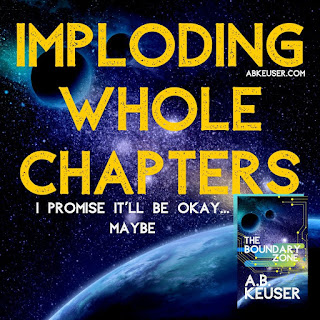 There are some things that are always going to be difficult when writing a book. I don’t care how long you’ve been doing it. I simply don’t believe those few things will ever get easier.

However, one of the things that I’ve become immune to--that used to be SO. DANG. HARD.--is cutting words.

For The Boundary Zone, I removed a lot of random sections and sentences. Things that don’t feel big in the scheme of things anymore (though I know that would have felt like cutting a piece of myself out back when I started).

Shedding words by the hundreds is just a part of the process now.

But the thing that actually stood out to me was removing four whole chapters in one of the later revisions.
It was necessary, but it still felt a little like an amputation at the beginning.
Now, if feels like an appendectomy.

According to my first save date, I started compiling thoughts and snippets for The Boundary Zone back in 2012. The file those are still in is titled with the main character’s name (I should probably change that, for clarity) and is stuffed full with drafts, and notes, and admin items.
Between the file labeled “Kenzie and Cable D4 Massive Edit” and the one labeled “KENZIE D5”... I took a metaphorical scalpel to the electronic pages.

That's about a weeks worth of work (or an extraordinarily productive day), vanished in a snap.

I did replace those four chapters… with one that completely changed the flow of that part of the plot.
The book is better for it, so in hindsight it’s started to feel like the onesy-twosy cuts that have become nothing at all to me.
And, all in all, The Boundary Zone still wound up being just shy of 96,000-words.

I’ve plucked those 10,000-words from the book, placed them in a file for potential later use, but… let’s face it, that’s unlikely.
There’s a book in the pipeline where a similar scene could work… but if history proves the rule, those words are going to languish forever.
Who knows, maybe I’ll edit them up again and include them as a bonus, deleted scene somewhere here in the future.

Have you come to terms with cutting your manuscript apart and piecing it back together to create something that is better for the loss? 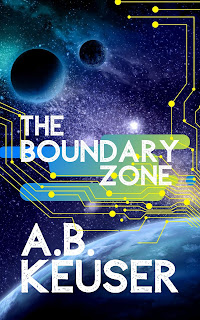 In The Boundary Zone, Mackenzie Flack plays with live wires for a living--both on and off book. By day, she follows all the rules and regulations, but stealing decommissioned parts from a space station in the midst of tear-down doesn’t leave time to suit up when a circuit can’t be shut down.

Get your copy of The Boundary Zone today!