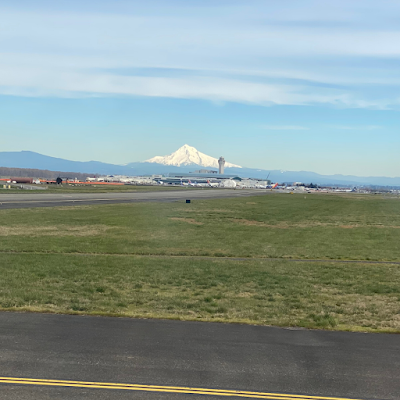 I’m only going to give you the basic facts of why I flew when I did, as I have not asked permission to expand on the details:


Earlier this month, my father had a heart attack and sought medical attention. Shortly thereafter, he had open heart surgery for a quadruple bypass.

So I booked a flight and headed home as soon as I was able. Just over a week after his surgery.

The Phoenix airport is a place I spent a lot of time in my early twenties. My now ex-husband worked for an airline and I was able to fly anywhere in the US for free as long as there was an extra seat on the plane.

I’ve spent my fair share of time waiting at those gates in the past fifteen years. So I’m well acquainted with the general population density of Terminal 4.

I got there 2 hours ahead of time, as usual. And of course, I stepped into the air conditioned space and my nose immediately started running. Which began a long, internal argument on how to handle the situation without freaking anyone out.

The ticketing counter beside the door I came through was packed.

I like to think I’m a pro at security after so many years getting used to complying with TSAs rules. I know and am ready for the fact that my left ankle triggers an error in the body scanners and why, so I can get through the routine check pretty quick. Normally, this is something that is key, because anxiety and I are old friends, and I’m not worried about TSA flagging me. I’m worried something I do is going to hold up the line.

There was no line to hold up.

I handed over my ID and scanned my boarding pass while a TSA agent had a very lovely conversation with a minor who would be traveling unattended. I was directed to one of two lanes. As is my usual luck with lanes (more often grocery than anything else), I picked the one with the guy who had to unlace his military boots and empty every pocket in his cargo pants. He was then pulled aside for a full water bottle in his bag. I don’t think he flew often.

By the time I was past the metal detector (no ankle error possibility this go) the minor and his chaperone were just starting to fill their bins behind me.

Inside the terminal, however, the corridors were just as crowded as ever, and there was no sign that the virus had yet dampened people’s travel aspirations. Some people wore flimsy surgical masks, but they were in the vast minority.

When I got to my gate, however. The mood shifted. The people waiting in seats separated from their nearest neighbor by the recommended six feet looked worried. They shot glances at everyone moving around the open space. Beyond the floor to ceiling windows, the mood was reflected in a downpour that prompted a man behind me to grumble about flooding cancelling flights. But as the rain cleared, and the usual glaring sunlight came back, moods didn’t improve.

The people around me were removed from those carousing in the tequila bar by more than simple physical space.

My flight was full. It was loud. And it was turbulent*.

Those flight attendants were absolute angels. By the end of the flight, I don’t doubt their smiles were drawn on.

I got into Portland near to 8pm. The airport was exactly as I would have expected (It is my second most familiar airport, as it is technically my “hometown” airport). There were masks here as well, but nothing odd in the number of people. Stores and restaurants were still open.

PDX seemed to be business-as-usual.

When Portland shut down it’s schools the next day, I had a feeling that wouldn’t last. 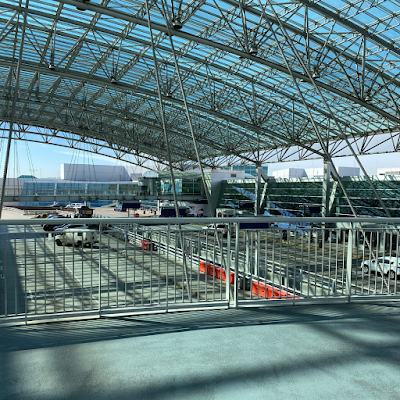 Due to the 4 hour drive that morning--and neuroses--I arrived early (earlier than necessary--the jetway door to the O’Hare flight was still open when I got to my gate). Driving into the airport already felt off. Turning in my rental car, it was the lack of sound that unnerved me.

The Portland airport is never loud… not really, but there was a sort of silence that doesn’t match the space. And with the exception of the rental car attendant, and a man who came this close to walking into me because he does not know proper elevator etiquette… I saw no one until I was through the doors.

Previously, because of delays and other nonsense, I have been in the Portland airport at 2am. I know what PDX looks like when it is deserted.

This was the closest I’ve ever seen it in daylight hours.

With the exception of the gift shop right after you get out of security for the B/C gates, I did not see a single store that was open. Restaurants were still serving, but compared to what I’m used to--compared to the crowds I’d seen in Phoenix the week before--they were dead.

Security was a little heavier than Phoenix. But I think that was just because I wound up in line after a family of eight. Luckily, they went to the other scanner.

I had a brief conversation with the woman who asked me to wait for the body scanner until they could clear the screen from the man who’d walked through before. She was lovely. We talked about the weather, not the virus.

No one in TSA wore masks, just their usual gloves.

When it was time to go through, I remembered to shift my weight, and my ankle didn’t trip the sensors. My hair flagged instead. Of all the things…. But overall, my time in security took less than five minutes from entering the line, to sitting down on the bench beyond the scanners to put my shoes back on.

Then, the oh-so-long walk to the American gates.

Between Security and C17, the Alaska gates were almost empty. Most of them had so few people seated in the waiting areas, I wasn’t sure if they were using the empty gate to practice their social distancing, or if they were waiting for a near-empty flight.

I paused to grab a cup of tea, and took a moment as they were making it to really look around.

On the drive in, a coworker had texted me to let me know that PDX was encompassed in the Washington epicenter circle on the CDC map. And based on what I heard in the terminal, at the gate, and even on the plane, the vast majority of the people in the airport were people like me: heading home.

Some had cut their trips short because the bars and restaurants had closed down that day. Some had changed their plans because they were worried domestic flights would be shut down and they needed to be home before that happened.

But there were just as many who weren’t wearing masks.

This time, more people stood away from the boarding line, giving each other distance. More people took the time to wipe down their seats and tray tables with disinfectant wipes.

This flight was not full. It was not loud. The skies were calm. 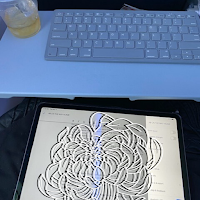 All of the first class seats were taken. But I do not believe a single other row had its seats full. I had a row to myself, as did the man in front of me, and the guy on the opposite side of the aisle. I did not get up to do a headcount. But if the plane was half full, I would be amazed.

PHX was more subdued than I’d left it.
Unlike Portland with it’s one long concourse, the segmenting of the gates into multiple short concourses may have contributed to the fact that the restaurants were busier--or maybe it was simply the distance from an epicenter.

Getting past the secured area took me into a ghost town. I didn’t see a single person who wasn’t intently heading for the checkpoint or baggage claim, who wasn’t in a uniform. The carousel where checked luggage would soon appear was surrounded by a halo of people standing apart and almost all wearing the same expression. No one wanted to be there any longer than possible. Even more so than usual.

When I left, the roads inside the airport were empty. Scarcely anyone was on the freeway for my short drive downtown.

I can only hope this means People are starting to take things seriously. 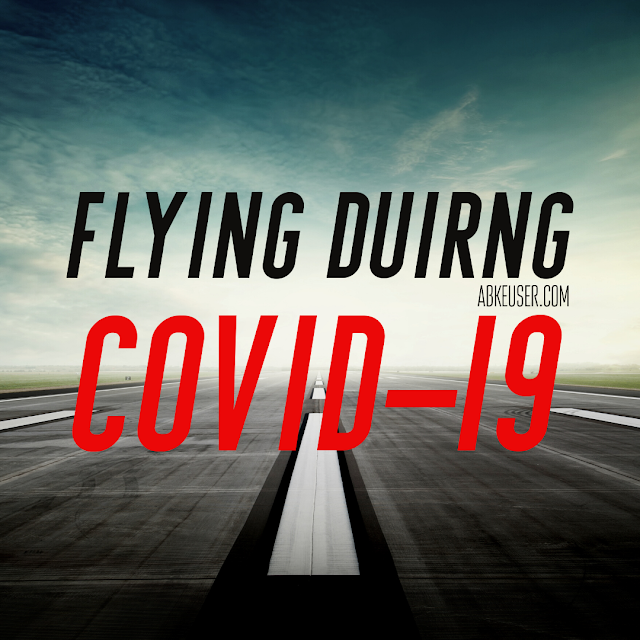 *Not the Vegas connection of 2006 rough, but that was a particularly special event.