- March 16, 2020
For those of you who’ve been around since The Disappearance of Flynn Monroe in 2017, this announcement may excite you.

The series has a new name, the books have new titles and have been completely redone.

It was very important to me to retitle because of the possible confusion on Amazon listings, I’m doing everything I can to be transparent about the previous versions, because I don’t want you to pick this book up thinking it’s going to be something 100% new. But it kind of is.


Book One is coming March 29th! For those of you who love metrics, Slow Burn Dark, is around 113,000-words.
That’s more than 80,000-words more than the book had when it was called Enemies of a Sort.


Flynn Monroe escaped a failed rebellion with an ugly scar around his neck, a price on his head, and a theory that his side had plans for the most coveted backworld in the Colarium-controlled systems. But three weeks on the planet has unearthed nothing except the usual five hundred thousand pounds of UPD-5: the most powerful--and dirtiest--way to fuel a starship. The mines might be the reason his ex-commander set their sights on the planet, but the list of potential crimes scribbled on his junkyard ship’s walls aren’t yielding answers. His new neighbors are focused on terrafarm feuds and union disputes, not a reignited war. And Flynn can’t warn them until he figures out what, exactly, Archimedes Holzen has planned.

Anointed by an ancient religion, Kathrynn Monroe sees futures in the patterns of nature, but the Great Mother’s gift turns lies into phantom blades against her nerves, and lovers fear her when they learn the discipline she follows. She saw her best friend’s plot to murder her twin too late. Her interference cost another’s life. Flynn is gone, the rebellion they both served has traded tactics for blind revenge, and the probabilities of destruction tick higher every day. She needs to find a future that keeps those she loves alive. One that stops the Lazarai from destroying a planet--and everyone on it. 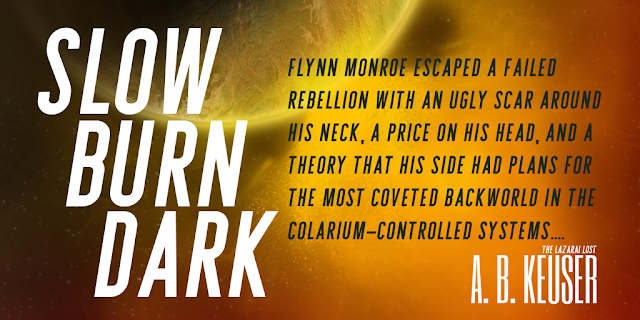 Even though it is a completely different version of the story, I want to give those who bought the original version the opportunity to snag this one for free in that first week.

Now, if you want to wait until the week passes and buy it at list, awesome. But I’m letting you know now, that you’ll be able to get it for free when it comes out.

Book two will be released in much the same way.
Covers Flynn Monroe Lazarai Lost My Novels Release Date