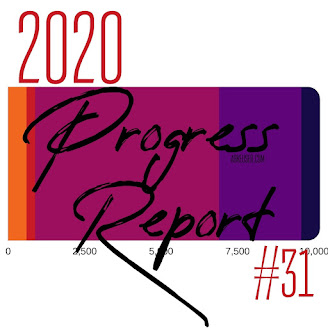 Along with plugging away toward my next deadline, I managed to finish up two drafts and filed those away for the next stage of their lives.
The “end of life” stage of drafting is always slower than just starting out. Mostly because early drafting is a place you can make huge, ugly mistakes and fix them later. When you get to the end of a later draft, you have to be careful you aren’t stabbing the next one (which could be the final go) in the proverbial back.

On 8/3 I passed the 2019 August count… which wasn’t hard. I think I missed recording some stuff though, because I know I did a fair amount of writing in the mornings while we were at lake Tahoe the final week of the month, but they aren’t in my spreadsheet… and if I don’t put it in, my brain questions whether or not it really happened.

Between a final pass on a short story, a “fix the soggy middle” in a book that’s still at least 15% away from completion, and the slow and steady roll toward finishing the set up for a complete rewrite… I managed to knock a few pages off the top of my editing pillar.

I really need to sit down and go through the things I’ve read to add them to GoodReads. Much like the missing words from last august, I find myself forgetting just how much I’ve read if I don’t write it down.

This week, I am starting Change in Momentum, book 2 of the Fleet of Malik series by Liana Brooks.
Progress Report