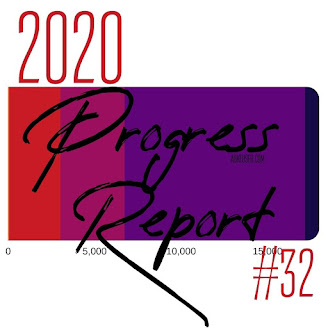 I have a few drafts that are lining up like dominoes, and another one fell this week. Finishing a draft is both exciting and distracting. For me, that means my brain wanders off, thinking about the fun thing I could put in its previously scheduled time slot. Doesn’t matter that the slot already has something waiting to move (usually the next closest thing to a final draft). But if I don’t write down a clear plan, my brain gets flighty. So I finished a draft of something that is due in October, and now it’s on to the next thing.

In an odd turn of events, I managed to get over 2k in for the day last Friday… despite it being a tattoo day. I think it was because I’d gotten mostly used to getting tattooed at that point. After three appointments in 4 weeks, my pain receptors just threw in the towel, cussed me out and left the building. (Btw. I’m not excited for the next appointment - we’re getting super close to the knee ditches)

This week, (yesterday, in fact) I passed the 2014 August count and the number I needed to hit to stay on target to finish the year at dead average… the next goal is to pass my Aug average, but that’s ~22k away, so it probably won’t be next week. But maybe early the week after.

On Wednesday, I managed to pass the total year count for 2014.

16 pages edited
The only editing I did this week was getting a fast draft reorganized. Another problem with bouncing around/writing in a bunch of places is that I sometimes wind up with a book that has some sections out of order. It’s a headache of my own making. However, if anyone would like to take the blame….

What I’m reading
I bought the final three books of a romance series I’ve been reading and am slowly plodding through those in my free moments. I won’t lie: I use romance novels and graphic novels to bulk up my GoodReads count. Both are quick and easy, and there are so many out there to choose from.